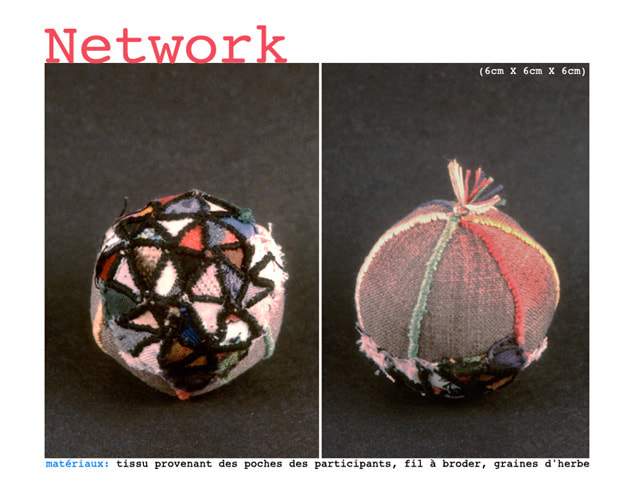 NETWORK
Pocket jewellery; 6cm x 6cm x 6cm,  Basel and Barcelona.
Patchwork of fabric pieces cut out from the pockets of over thirty friends who would receive in return a piece of my own dress to patch up the hole left in their pocket. The little ball is filled with grass seeds. 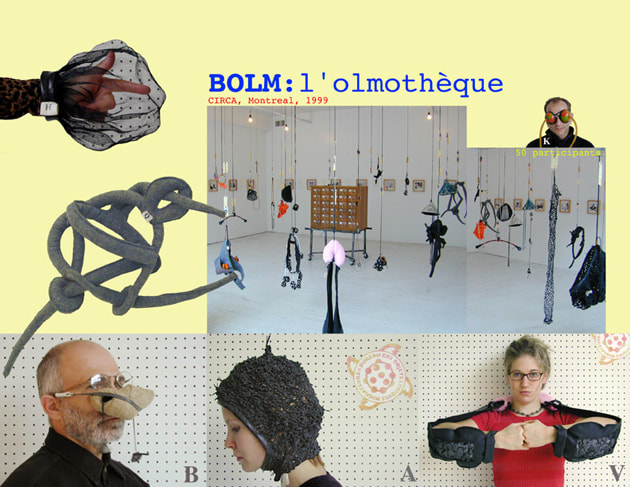 L'OLMOTHEQUE (The Library Project)
​Presented at Le mois de la photo, CIRCA, Montréal.
Interactive installation during which visitors were invited to borrow wearable objects and take them out of the gallery, into public spaces. These "borrowers" were asked to give a temporary title to their object (labeled from A to Z) and to document their experience through snapshots and written notes. The information was returned to the gallery to feed this cumulative exhibition and maybe influence the next participants. While in transit, the objects were replaced by a BOLM ID card of their borrower, stating name, title, and date of proposed return. The file cabinet now contains 88 texts and portraits of the fifty borrowers in Montreal and thirty-three in Toronto, together with their 1700 pictures. 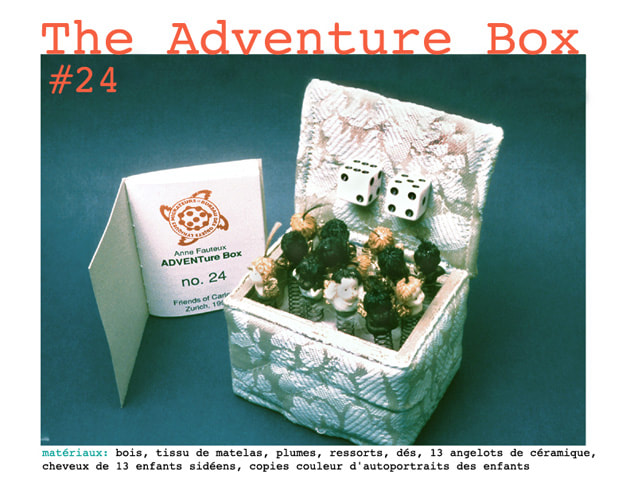 THE ADVENTURE BOX #24
Box wearable as a bracelet, made of wood, fabric, feathers, plastic, metal, hair, with accompanying booklet, 12cm x 9cm x9cm, Montreal and Zürich at Friends of Carlotta Gallery.
Thirteen AIDS afflicted children participated in the project by drawing a self-portrait, voicing their wishes (documented in the booklet), and giving a hair sample to put on the angels' heads inside the box. Fundraiser for The Lighthouse, an AIDS hospice in Zürich.  24 artists  did one box for each "Advent" day before Christmas. Mine was day 24, Christmas. 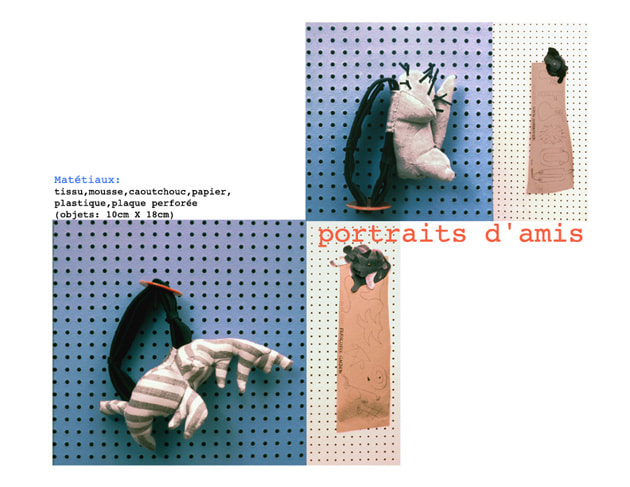 PORTRAITS D'AMIS (Portraits of Friends)
Biceps bracelets in fabric, stuffing foam, plastic, rubber inner tubes, 12cm x 10cm x 10cm, Montreal.
Fourteen participants drew spontaneous outlines as templates for me to build objects that represented their mood of the moment, and could in turn be worn by other friends. 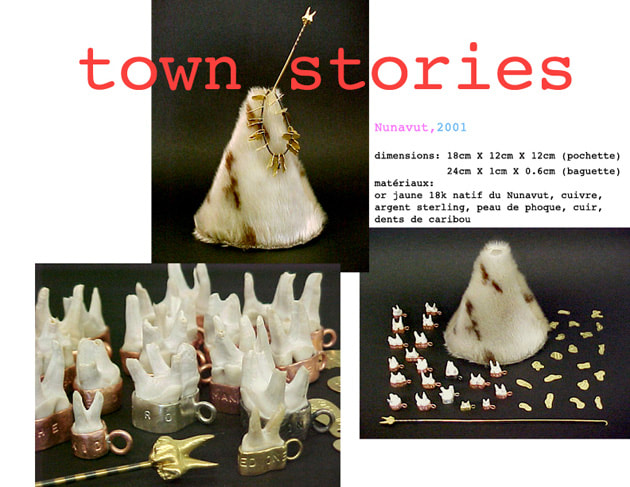 TOWN STORIES
Game made of seal fur, caribou teeth, 18kt gold from Nunavut, sterling silver, copper and rubber, 22cm x 20cm x 20cm, Cambridge Bay in Nunavut. Sponsored by Lupin Mine (NU), collection of Nunavut Government.
This is my version of the traditional Inuit game in which the players take turns using a string to fish one seal bone at a time out of a seal pocket, and construct a tundra story inspired by the bone shapes as they show up. In Town Stories, the string is a tooth fairy's magic wand and the pocket is a volcano. The bones are caribou teeth set in gold, copper or silver, baring names of the various characters of a settlement--policeman, teacher, banker, nurse, housewife, etc--and a set of pond shapes in gold bearing names of various urban locations--school, jail, church, store, etc. Then the players proceed with their gossip. 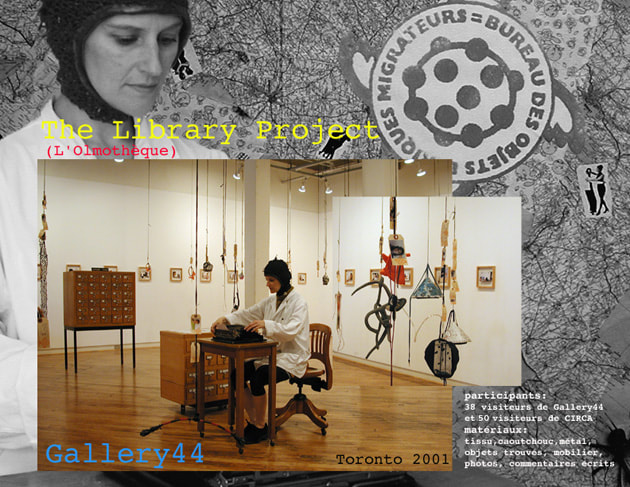 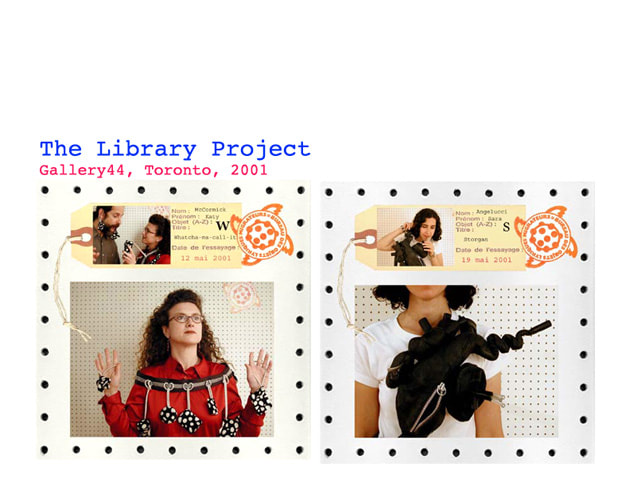 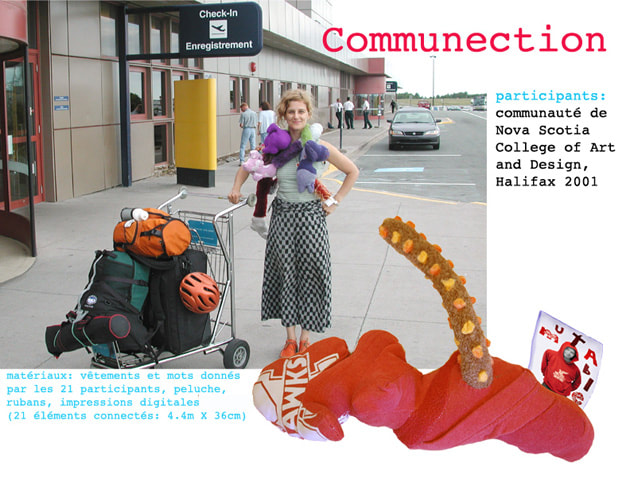 COMMUNECTION
Scarf made of clothing, fake fur, ink jet transfers; 3.5m x 37cm x 30cm, project for an artist's residence at Nova Scotia College of Arts and Design, Halifax.
Twenty-one participants from the NSCAD community contributed one of their used pieces of clothing to the project, along with a favorite word and a list of ways they would like to be treated if they were turned into clothing themselves (e.g.: “Love me even when dirty”). The favorite word have been cut out of the clothing and reassembled to create a stuffed bundle. Each bundle bears a label showing the selected word, the care instructions, and an image of the participant wearing the chosen piece of clothing. All portrait-bundles are connected to one another by a furry umbilical cord. 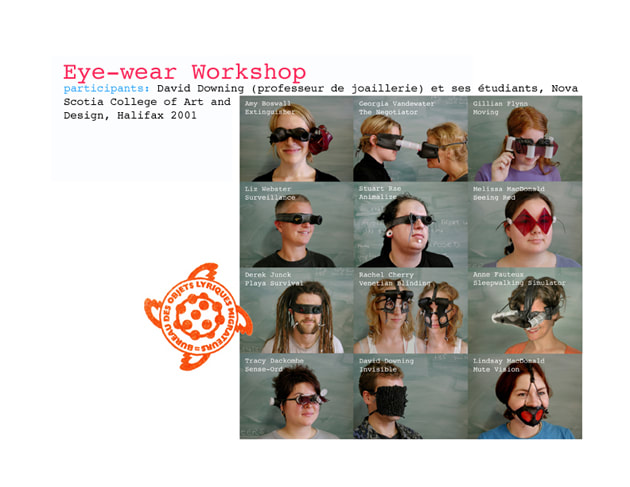 EYE WEAR
Recycled inner tubes, film containers, negatives and photo filters,  NSCAD, Halifax. Presented in 2003 at Harbourfront Center, Toronto.
During a workshop I co-conducted as guest artist at NSCAD, I guided the students and their teacher to produce vision apparatus that could be part of a BOLM collection. Our pieces are presented in a series of 12 portraits as proof of the successful functionality. 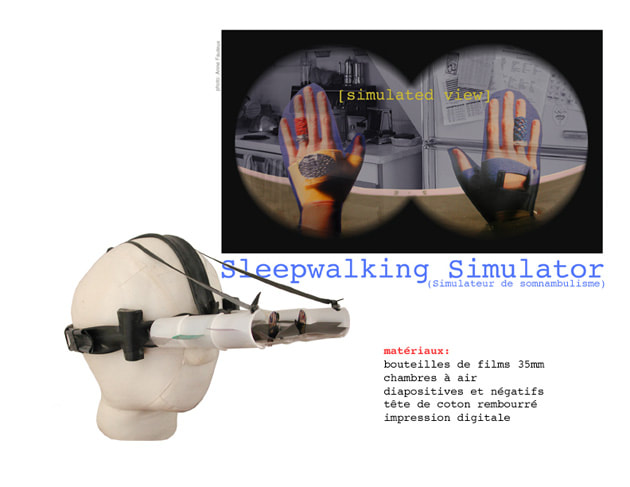 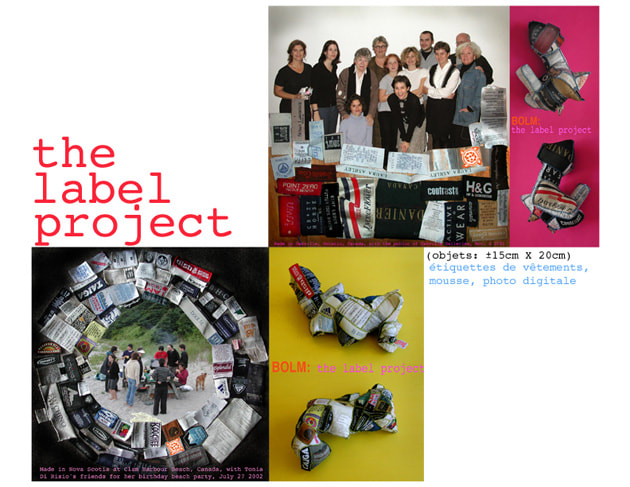 THE LABEL PROJECT I
Wearable objects, 18cm x 12cm x 14cm, made with the Oakville Galleries staff, Ontario, and made in 2006 with the Eyelevel Gallery staff, Halifax,  and later with many more groups.
Small groups of participants in various contexts were asked to rip the labels off the clothes they were wearing. After being “de-branded” a picture of the group was taken. The labels were then randomly sewn together into an organic shape, then stuffed to make a wearable trademark-monster. Over the following year, the label monster could be lent to any of the participants who wished to adopt it. 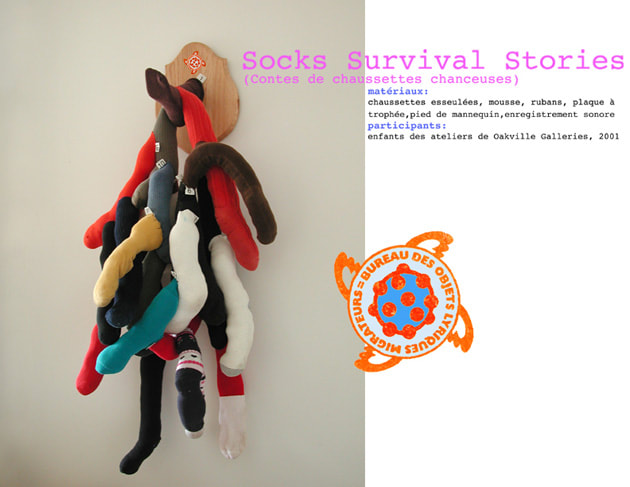 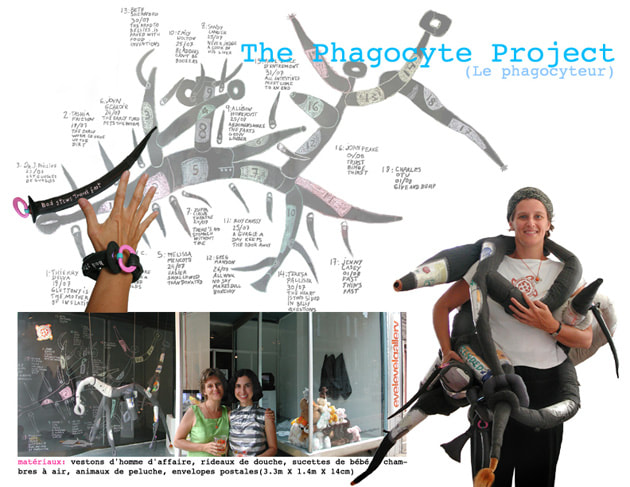 THE PHAGOCYTE PROJECT
Intestine-like soft object that is worn coiled around the body; all recycled materials given by the Halifax community: men's business suits, shower curtains, baby pacifiers, letter envelopes, inner tubes, stuffed animals. 3.3m x 1.4m x 14cm, 90 min. video, 3.5m x 3m drawing,  Eyelevel Gallery, Halifax, and presented again in 2003, Centro Cultural Contemporaneo de Barcelona, and in 2008 at Mercer Union in Toronto.
The Phagocyte Project is an evolving, interactive and transitory event. Resulting from transactions with eighteen consenting individuals met randomly in the streets, it becomes a fragmentary portrait of the Halifax community. The participants were asked to donate a small personal possession and a comment about its meaning which were then embedded in this constantly mutating stuffed object. In exchange, they were given a sample of the Phagocyte. On each sample was written a twisted proverb (with a digestive theme) to be repeated persistently by its new owner until that neo-proverb spread around town. Through its urban safari, the Phagocyte accumulated meaning and weight, and exhaled poetry. The Phagocyte Project evokes our urge to possess and fear of losing (ourselves...). It also reminds us we are literally and figuratively "walking digestive tubes". In the gallery windows, along with the Phagocyte, were displayed a growing diagram of the piece and a video featuring the exchanges. 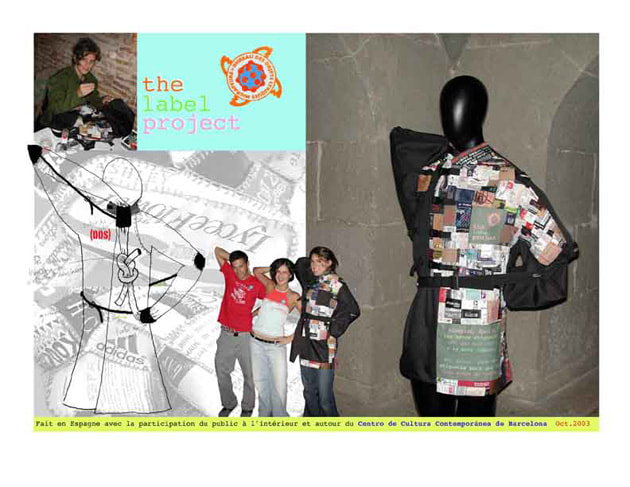 THE LABEL PROJECT II
An overly branded “fashion victim” straitjacket forcing the wearer to pose like a model on the catwalk, Centro Cultural Contemporaneo de Barcelona, and 2004 to 2008 in the streets of San Francisco, Mexico, Switzerland, Luxembourg and New Zealand, and carried on by BOLM ambassadors in China, in the Philippines, and on a cruise to the Caribbean.
Over 150 visitors to the museum and the surroundings donated their clothing labels which I publicly sewed on a custom made straitjacket, day after day to form a label patchwork. The participants’ fingerprints were stamped in a booklet as their signature of the project. Thanks for their humility in letting go of part of their identity… As acknowledgment of their participation, the back of their necks or the side of their waists were stamped with the BOLM logo. 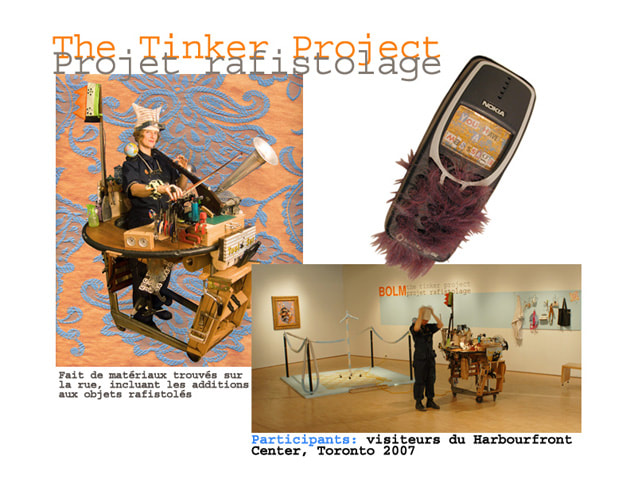 PROJET RAFISTOLAGE/THE TINKER PROJECT
Mobile repair studio entirely made of recycled materials found on sidewalks, including the materials added to the “clients’” objects, Harbourfront Center, York Quay Gallery, Toronto, and with a lighter version in 2018 and 2019 at the Maker Faires of Montreal, Hamilton and Paris.
Visitors were invited to bring along their faulty objects, precious or not, to have them repaired or revamped. The visitors would become “clients” of the "Tinkerette" (myself) who could handle many trades, namely jewelry, textile, woodwork and low-tech mechanics. In compensation for the work, whether technical or poetic, the Tinkerette would receive money, services, or objects of the clients’ choosing, reflecting in value their appreciation of the work. A logbook recorded the thirty-four participants’ objects' history, before and after. 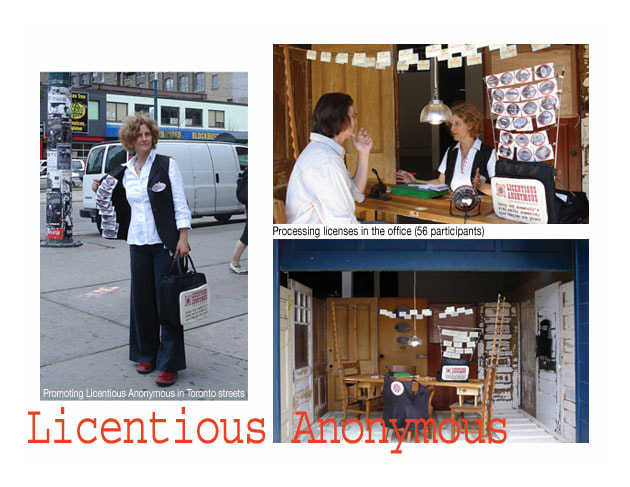 LICENTIOUS ANONYMOUS
Office space made exclusively with found objects and technological devices (computer, LCD screen and speakers), 3m x 4m, Mercer Union, Toronto.
This project was an attempt to create an interdependent sub-community whose behaviour would become more permissive. It was accessible in three locations, either held in a shabby office in the gallery, carried out in the streets in a briefcase and a peddler's vest or through a weblog http://la.bolm.ca. As a Licentious Anonymous agent, I briefed visitors/passersby and invited them to take part. After a ridiculously long sequence of steps to enrol in — a performance in itself — the new participant was sent to perform the action stipulated on the freshly acquired License. 50 persons participated and contributed to build a collection of 60 licenses.
Excerpt of the weblog: "Welcome to Licentious Anonymous. The former licensee who produced the license you picked and the others who picked the same one are looking forward to reading your blog about the ups-and-downs of your licensee activity. Your license is a performance prescription which should entice you to go beyond your limitations and open doors in the everyday reality of your life. Thank you for contributing your images, sound files, and comments on the experience. In so doing, you are injecting life into art and art into life. You are also becoming a mentor for the other collaborators of the Licentious Anonymous project, a socio-poetic experiment addressing conventions and transgression." 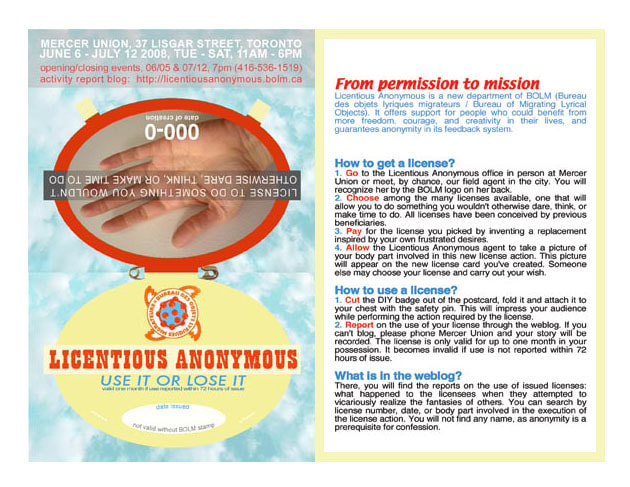 LICENTIOUS ANONYMOUS
Invitation card to participate as well as a base for actual license cards, 10cm x 15cm,  Mercer Union, Toronto.
Interactive project requiring the collaboration of people who could benefit from more freedom, courage and creativity in their lives; mix of objects and images, situations and new media; 2008; happening in three locations at the same time: installation at Mercer Union a Centre for contemporary Art, performance in the streets of Toronto, and on line as weblog at http://la.bolm.ca 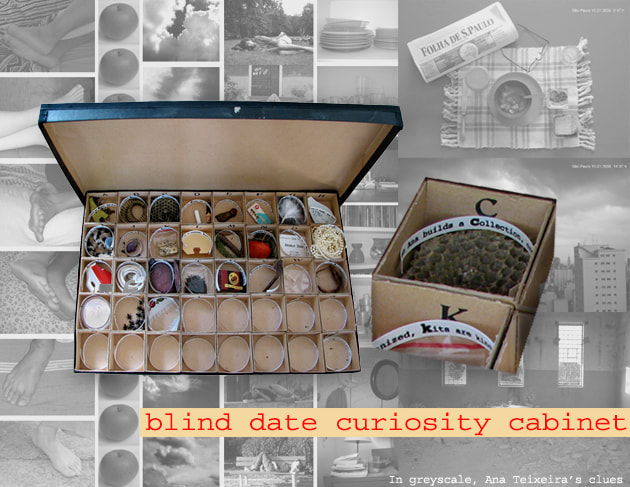 BLIND DATE CURIOSITY CABINET
Made exclusively with found objects, 60cm x 135cm x 10cm, Mercer Union, Toronto.
Part of the "Bitmap Genesis" collaboration, in which Ana Teixeira and I created "identikit portraits" of each other in seven days, built exclusively from 7 non-descriptive biographic clues sent through seven e-mails over a week (images, poems, movies, phrases, sound, references, etc). Ana and I were perfect strangers going to have an exhibition together at Mercer Union. This was a way to introduce ourselves to one another through work we produced before we actually met, and each get to know the other through her creativity and her own personal references. We incidentally got to know our own selves through the other’s imagination. In my “Blind Date Curiosity Cabinet”, each small object was dropped into an alphabetically identified section of the box in free association with a sentence inspired by Ana's clues. E.g.:”When Ana peels an apple, Ana is an apple” (apple seeds in section A).; “When soup is ready, Ana feels harmony” (porcelain spoon in section H); “When Ana sleeps, all the sleepers in the world sleep in her ”(stuffed animal in section S). 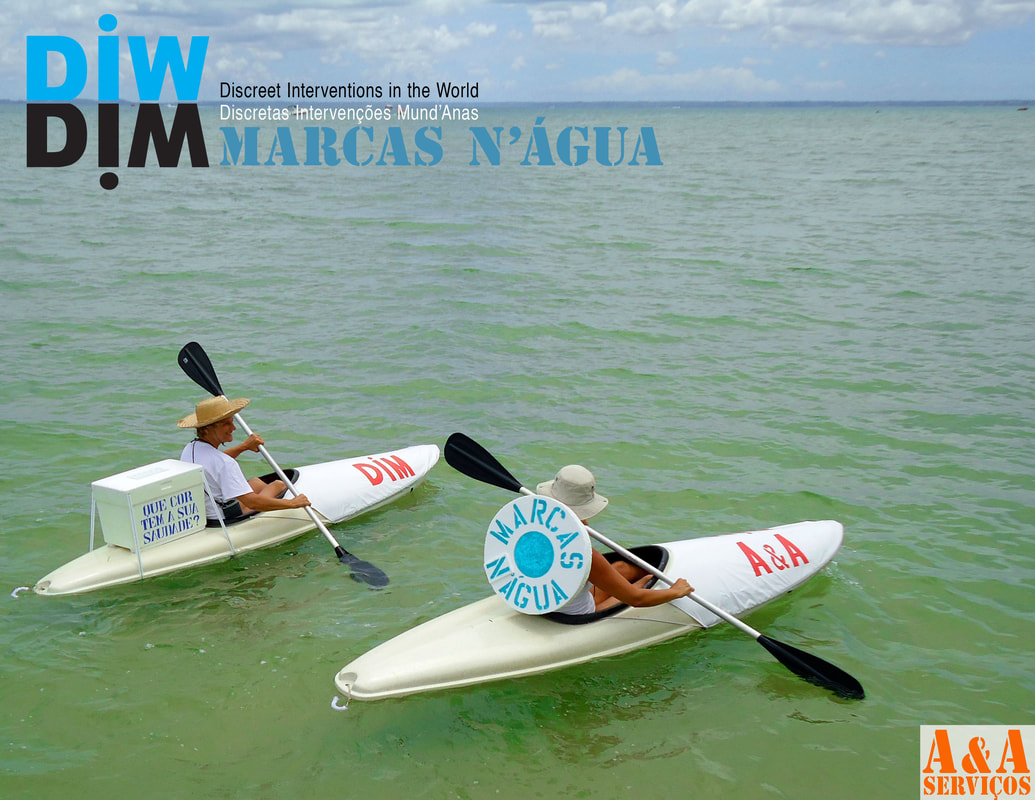 DIM/DIW BY A&A SERVIÇOS
Made of two kayaks, cooler, sea ice and art materials&tools
Discretas Intervenções Mund'Anas / Discreet Interventions in the World is a collaboration with Brazilian artist Ana Teixeira in the context of a two month art residency at Istituto Sacatar (Itaparica, Brazil). Our poetic ficticious agency A&A Serviços was catering free and ephemeral poetical moments to the people on the beaches through a questions and answers experience. 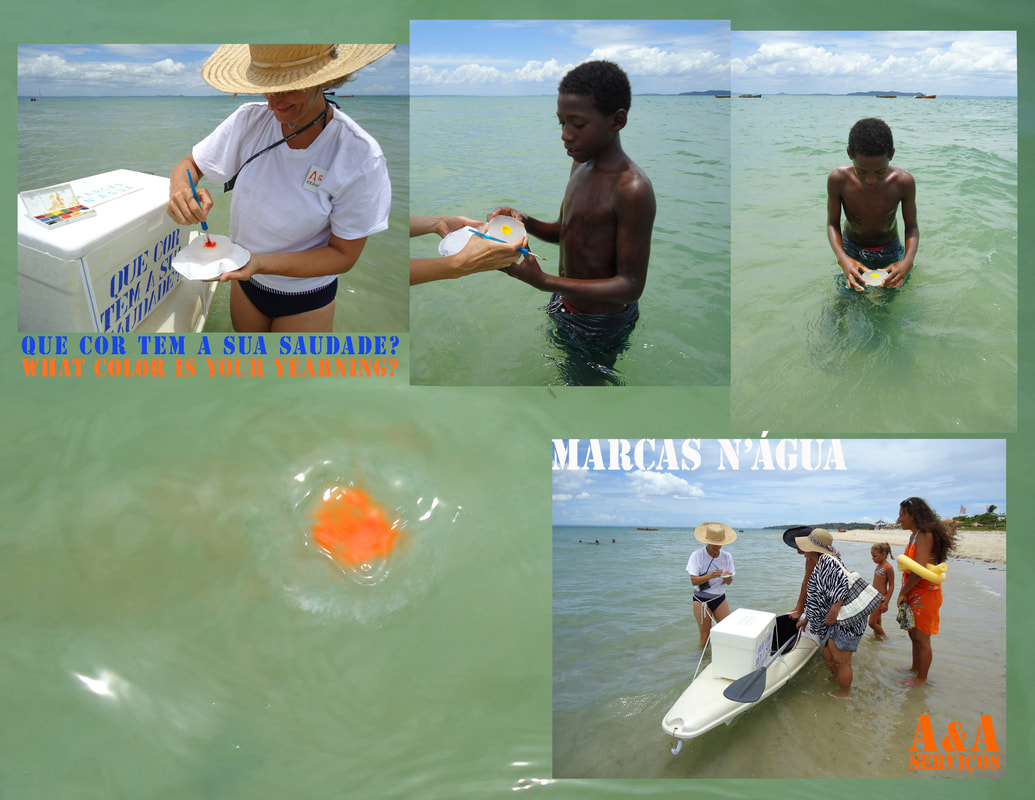 DIM: MARCAS N' ÁGUA (DIW: MARKS IN THE WATER)
Commuting on two “prepared” kayaks loaded with sea ice cubes, we stopped on beach shores to ask people: “What is the colour of your yearning/melancholy (saudade)?” The answered colours were then painted on the ice cubes which were immediately released in the sea by the participants in order to tint the water and merge with everyone else's “saudade”... since the beginning of humanity. 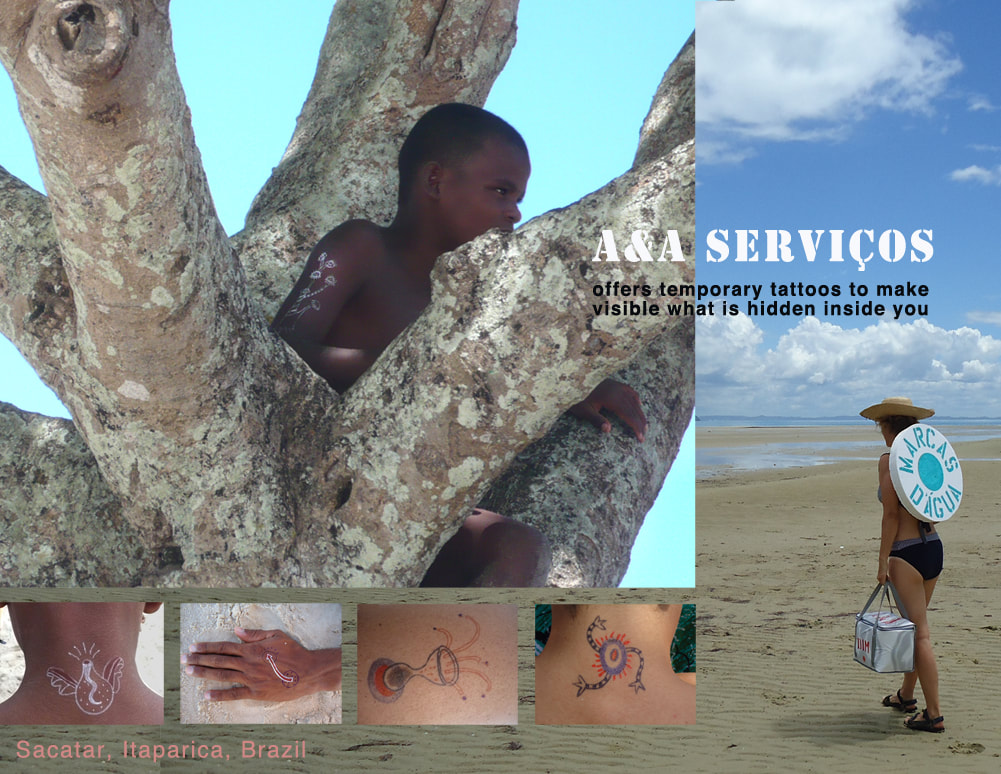 DIM: MARCAS D' ÁGUA (DIW: WATERMARKS)
Based on the question “What is invisible in you that you'd like to make visible?” (Marcas D'Água), we drew temporary tattoos on thei participant's skin, interpreting their answers. 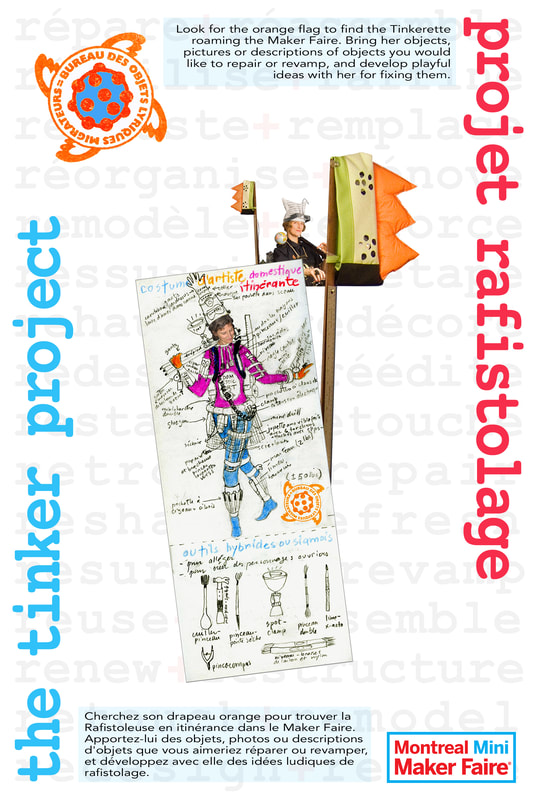 PROJET RAFISTOLAGE / THE TINKER PROJECT
This 2007 project was revived in a lighter version specifically for Montreal Maker Faire. Then it took off to the Hamilton Maker Faire, and a year later to Maker Faire Paris.